Skip to content
Posted inLife in The Well
Posted by By Sarah McPhie October 13, 2020No Comments

PART I: Women and The Well

The Well was started as a new breathing space in Govanhill. Somewhere the community could talk about what was happening in their lives, solve difficult problems, share joyful moments and find reliable support. The Well recognises the importance of women’s roles in the workplace, in the home and in education, offering activities and advice that caters to different aspects of their lives. Above all, it helps women to build relationships and connections in their communities, providing extra resilience and practical guidance when it is needed.

Women from Asian, European and other ethnic groups in Govanhill join together at The Well to support each other in their lives through the power of conversation, craft and learning new skills. Just as The Well is a multi-faith service, so it is multicultural: we listen to our service users’ needs and stories without prejudice.

Here, service users from The Well tell us their stories – and explain how the centre has helped them over the years.

Nadeema*: Find solace and support at The Well

“Feeling part of something was important; it was lonely being a single parent. The Well feels like a service that no one else offers, a service that isn’t judgmental” 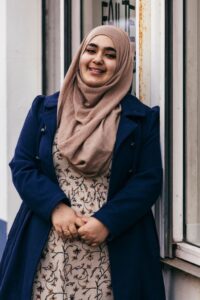 , and so I was raised in Shawlands. I’d moved to Manchester for a couple of years, and when I came back the place I rooted into was Govanhill, where I’ve been now for four years. A lot of the Asian community were building their place in Govanhill, setting up their fruit and veg shops, their halal shops. It felt like it had it all.

It was a bit lonely at first, everyone had moved on in life, when I was just starting afresh. The first thing I got involved with was the Bubbles playgroup, which The Well ran on Thursday mornings. It was great, the workers made me feel welcome; a nice playgroup to ease into in the area. I did make some friends at The Well, but more so with the workers. I’d told my history to Rhoda and Penny explaining what support I needed.

Feeling part of something was important; it was lonely being a single parent. There was no pressure or expectation. Penny suggested the Chai and Chat group, and then there was volunteering; it felt like there was enough to follow on from, if I wanted to get involved with anything else.

The Well feels like a service that no one else offers, a service that isn’t judgmental. Besides the Well there’s also Milk Café, which is another service I reached into. If I ever speak to someone who’s new to the area, I always say that the Well and Milk Café are the first two places that helped build me and make me into who I am.

For me it’s through the workers, as I wasn’t looking for another mum friend. I needed someone who would support me when my confidence was low. The support has been consistent: four years down the line, I feel like they’re an extended family. If I’ve asked as a friend, they’ve given it to me. It’s not all about filling out a form or making a phonecall for you.

Leyla*: Get help at The Well in a crisis

“I felt like giving up. But I wanted to show I am strong. Eventually a friend told me about the Well, and I met Penny, who comforted me and asked me what was happening” 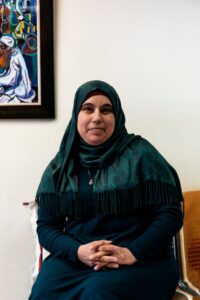 I have lived in Glasgow for nearly four years, but before that I was living in England. When I arrived it was difficult to understand the accent. But I like it here – I can see friendly faces, and people were courteous on the street. I had a simple routine at first.

I’m from Lebanon, which is very small, and I speak Arabic and Italian. When I started studying English here in Glasgow, the problems also started. My ex-husband said I wasn’t cooking, wasn’t cleaning – that wasn’t true, but he didn’t like that I was studying and meeting new people. When he saw me out with friends, or with our children’s friends’ families, he told me he didn’t like it.

There were other problems, but it all started at this point. It was my decision to study the language, and I didn’t need someone to tell me what to do. I have my own mind and can think for myself.

My husband wanted me to stay at home, and the problems got worse. I started to research what I could do. I felt like giving up. But I wanted to show I am strong. Eventually a friend told me about the Well, and I met Penny, who comforted me and asked me what was happening. I also told the full story to Rhoda, and they helped me to find a solicitor.

In my view, the Well makes Glasgow a better place. I wish it had more space, there are so many people who could use it, and have conversations in private. Now I want to finish my study and do a course in childcare, and help other people. I’m studying English and I’m also going to college. It changes the whole atmosphere of life.

Stories from The Well- Part 2