Skip to content
Posted inLife in The Well
Posted by By Rhoda October 17, 2016No Comments 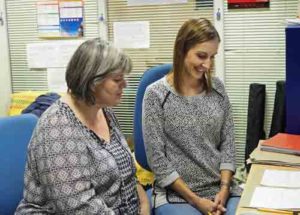 A few weeks ago I got a message from a friend that I’ve known for many years.  Sarah enquired about The Well and how things were going.  She has a marketing background, and as we talked the idea of Sarah working alongside Penny became a possibility which then became a reality two weeks later!

We’re delighted that Sarah has joined our team – 7 hours a week.  She brings additional expertise and enthusiasm to team, and we are thrilled that she wants to use her God given gifts and be a part of what He is doing in and through The Well.

Sarah has come in on Monday evenings, so she can experience first hand the work that goes on here.  She was thrilled on her first Monday to be able to tell one of our service users that he was due a tax rebate of over £200! Nice way to start:)

Sarah spent part of her childhood in Thailand, where her parents were missionaries & she brings an understanding of cross-cultural relationships with her.  She is married with two young children.

Every so often I have reason to reflect on the great bunch of volunteers we have here – this morning Joyce popped in.  I said “Are you Jaan today?”  She said “No, I’m just dropping this file in.”  She had taken someone’s file away to put together a summary of his case for him to take to his MP.  The summary has run to 5 pages of bullet points!  It must have taken her hours and I’ve no doubt that Mr Waheed will be be very grateful.  I know that several of our volunteers have done such things for people in the past, regularly going the second mile – determined to follow up and do their best for folks.  Well done team!