Skip to content
Posted inLife in The Well
Posted by By Rhoda April 1, 2019No Comments

We’ve just come to the end of a very busy week in The Well.

On top of the routine information and advice work we squeezed in the first of our 25th anniversary celebrations – our Chai & Chat group organised and hosted an afternoon tea party for the women who attend our various activities and they also invited the women from a neighbouring project – “The Space”.

I’ll let Sarah tell you all about it:

The Well enjoyed the first of a few planned celebrations yesterday to recognise its 25-year anniversary. This first event focused particularly on the work The Well does with women and children. The Well supports women from various ethnic minority groups in the Govanhill area by tackling some of the issues that face them, from social isolation to poor English skills. One-to-one relational support is offered as well as a range of group activities including female only English and IT classes, ‘Bubbles’ mother and toddler group and ‘Chai and Chat’ a group of women from varying backgrounds and cultures who meet regularly to get to know other women in the area. 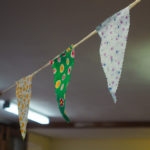 It was the Chai and Chat group that inspired the idea for yesterday’s event: an expanded Chai and Chat representing all cultures present and open to women who have used The Well’s services and their children, along with some of The Well’s supporters ranging from funders to church representat 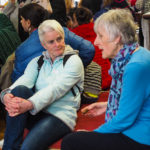 The event was an explosion of colour, culture and cake! Over 120 women came along to the event that was held in Govanhill Free Church, and approximately 30 children. The Well’s dedicated volunteers were on hand to play with the children and welcome people and serve the fabulous food. Some of the women who regularly come along to the Chai and Chat group took the lead under Penny MacLeod’s (Women’s Development Worker) direction in decorating the room for the event and preparing the delicious food that included delicacies such as: Romanian Walnut Cake – made by the women of The Space and Pakora made by two Chai & Chat women.

Manager of The Well, Rhoda Yarmahmoudi, thanked everyone for coming to celebrate The Well’s 25th anniversary and Penny MacLeod for organising the event. Everyone sang ‘Happy Birthday’ to The Well when a special commemorative cake was brought out.

Look out for more events to celebrate The Well’s 25th anniversary!” 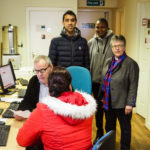 and – The Right Rev Susan Brown.  Go For It has helped to  fund The Well for 5 years, and we are extremely grateful for the huge difference their contribution has made to The Well, and were delighted when they asked if they could bring the Moderator to visit us on Wednesday.

What a great time we had with them, including a discussion about John 4.  One of our long term service users, and most recently recruited Board Member – Lolo, told them of the massive difference The Well has made to her life over many years, including her somewhat unusual request to source a memorial stone that she could take to Africa in memory of her mum.  Lolo went on to say there are other advice centres and she had been to many, but kept coming back to The Well due to the friendly atmosphere – she always sensed that The Well was about relationship and this is what made it stand out from everywhere else.