Skip to content
Posted inLife in The Well
Posted by By Sarah McPhie October 22, 2020No Comments

PART III: Built on trust: The Well’s place in the community

The Well began as an experiment. Could Govanhill be a place where a multi-cultural advice centre would work? Could The Well then find the funding to be sustainable? And could it build the long-term relationships with the community necessary to foster trust? We’re grateful that the answer to these questions has been so positive.

In the decades we’ve been working with the community, we have been learning, too. We have seen how the privilege of being entrusted with people’s faith, their wellbeing, their difficulties and their celebrations all depends on our ability to listen. We hope this is a skill we can continue to develop, since we know that every person will bring different experiences and different needs to our door.

Catrina: The Well changes with the community, but keeps its beliefs

“I found it moving that The Well has kept its deep values – particularly of listening. It will never go out of fashion” 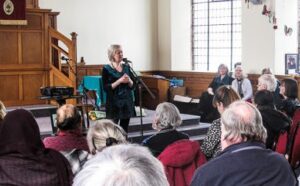 I worked in Pakistan as a volunteer for the Church of Scotland, which changed my life. I wanted to go somewhere that I could be useful and worked in a Christian village school as a teacher. I didn’t speak a word of Urdu till I went there; being somewhere rural really helped me to learn. When I came back home I really had my eyes opened to racism. I’d had such hospitality and warmth and kindness in Pakistan, it was shocking to come back to Scotland and hear people talk about ‘Pakis’; I wanted to do something about it.

I got onto a course for community development in Lancaster, then I was sent on placement to Bradford. A while later my mum heard the Asian bookshop in Glasgow was looking for someone. I thought I would give it a go. The shop sold Islamic books and Asian language newspapers and music; it was a fantastic way of getting to know everyone. Eventually the bookshop was marked for closure, but we did a questionnaire of Govanhill folk to find out what people did want in the community. We learned a lot: it became clear the women wanted a place to meet, and a place to get help with forms.

There were a lot of women who were on the periphery of their community, because of disability or mental health, or because they were divorced or single mums. They would literally live geographically on the edge of the community. We realised that The Well would have to be somewhere accessible, but not in the gaze of everybody, because folk would get self-conscious. They felt more comfortable speaking to someone outwith their community too, but who would understand their situation.

We got Church of Scotland funding, but it was from an inter-faith perspective. I always felt there should be a clarity that The Well was run by Christians who weren’t embarrassed to be Christian, but who were absolutely going to listen and respect other people’s beliefs. It’s always been a tightrope that The Well has walked.

I left in 2002 when the dispersal of refugees from the Home Office was still quite recent, so most of the people were Pakistani. But the lovely thing is that as Glasgow has become more cosmopolitan, the Well has been able to change too. Our volunteers got listening training and that’s why The Well been able to respond to the community, because it listens.

When we opened the Church said ‘you’ve got a year to prove it will work’. Slowly people came, but they were a bit suspicious. It was about building relationships. Women came with personal stuff, but we did a lot of helping with benefits forms, and a bit on immigration issues.

Govanhill wasn’t quite deprived enough to attract big amounts of government funding to regenerate it. It was quite often the first or second landing point for people when they arrived here, and there were still the remnants of the Jewish community and a very strong Irish community with people from Donegal. People would say of Pakistani people ‘oh they’re dirty, they don’t mix with anybody, they don’t put the rubbish out’ – the things people say about Roma community now. When I came to Govanhill I used to think of people leading parallel lives, and I hoped the Well would produce more crossover.

I found it moving that The Well has kept its deep values – particularly of listening. It will never go out of fashion. When we got past the three-year mark people started to trust us; it was a long-term commitment. If the Well were to close you’d lose 25 years of relationships. You need to be a steady presence in people’s lives, whatever way they go. To continue to say ‘we’re here, and that’s life’ and not see them as a failure if they relapse or they don’t make it.

Mr Abidi*: The Well as a place that earns the loyalty of its users

“I first went when I had various forms to fill in – the lady said ‘no problem, I’ll help you’. Since that time until now, the Well has been in my heart” 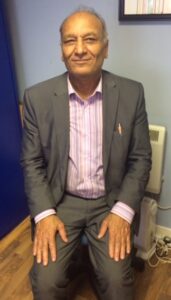 The team at The Well is helpful, friendly and very generous – they welcome you when you go there. The first thing they ask is ‘would you like a cup of tea?’! When I go there, I feel peace of mind, and I’ve been going for about 25 years. There’s no place like it, no place better than it.

I first went when I had various forms to fill in – the lady said ‘no problem, I’ll help you’. Since that time until now, the Well has been in my heart. The people who work there are part of my family. I still go there to say hello – it’s very important to me; I would never break the relationship.

I came to Glasgow in 1970, when I was 16; my father opened a butcher’s shop in the Gorbals and after three weeks I started working in a shop. We came from Kashmir, with my mother and sisters, and we left a home with no gas, no electricity. Back there we walked 2 miles and back to school, but I never went to school in Glasgow.

People are very kind in Kashmir, it’s similar to Scotland in that way, but I don’t go back there often now, as our family is here. Even if I’m away from Glasgow for just a night, I’m desperate to come back. I’ve been all around Scotland, and people are kind and friendly. People have a good attitude; if you give a smile, they smile back four times bigger.

I suggest to everyone if they have a problem – with forms or something else – to go to The Well. People worry about making an appointment, but you don’t need to worry about that. The volunteers also love their job and love helping people; they don’t make you feel like a stranger. They are open-minded and don’t bother about people’s religions or their colour, they help you as a human being. God chooses good people for a good cause. People with open hearts for everybody.

Stories from The Well- Part 2

Stories from The Well- Part 4