Skip to content
Posted inLife in The Well
Posted by By Sarah McPhie October 28, 2020No Comments

PART IV: Behind the scenes

If people make Glasgow, then the same is true of The Well. All kinds of people bring the centre alive, but to keep it going we rely as much on our full time staff as we do our team of volunteers.

Some staff over the years have changed, and others have stayed: what remains constant is our mission to respond to what the community needs with kindness and quality of care, providing good advice and reliable support.

Lesley: Volunteer at The Well to broaden your horizons

‘Folk come in about all sorts of different things, and as a volunteer one of the interesting things was that you never knew what you were going to be dealing with’ 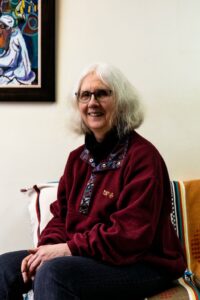 Catrina, the founder of The Well, came to our church to talk – she was looking for volunteers for this new project. She felt Asian women and British women were living parallel lives and not really integrating; she wanted to do something for the Asian community in Govanhill.

After The Well opened, one of the things that helped us to get to know people even better was when we organised a visit to Pakistan in 1996 with the volunteers. Some of the ladies that we knew helped to make salwar kameez and source the material; in the early days people would ask us if we’d been to Pakistan, and interest grew in the trip. It was a very good learning exercise – as even though you think you know what it might be like, the hospitality in rural Pakistan was quite something.  It made us think more about what it would be like to leave Pakistan to come to marry maybe a cousin or someone who you’d never met, your family had organised it all, and to be in Glasgow where you don’t speak the language and you don’t have any family.

Very often the women spoke no English and it was the men coming in first to The Well, to make sure we were okay. But still it took a long time before more of the women started to come in and talk.

Things have moved on since then, in the general community, and in the way friendships have developed at the Well. Some of the people we used to see a lot of, for a particular problem, have moved on. Folk come in about all sorts of different things, and as a volunteer one of the interesting things was that you never knew what you were going to be dealing with.

Rhoda: People deeply respect that we are people of faith

‘If I was really serious about working with the Muslim community, I had to go to Pakistan to understand where people were coming from.’ 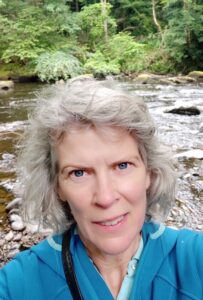 I grew up on a farm in Northern Ireland: it was very white, and monocultural – you’re either Protestant or you’re Catholic. That was as far apart as it went. The first time I met a Pakistani Muslim, in the late 1980s, it gave me a completely different perspective.

At first I wanted to be a community police officer in Northern Ireland. I knew a couple of them and I loved what they did. I’ve always wanted to work with and support other people, and eventually I started teaching the Bible to children with an organisation that brought me to Glasgow. My interest in the Muslim community just grew, and a friend told me I should really get in touch with the Well. I phoned Catriona, and she invited me out for a chat. I started volunteering and very quickly I wanted to learn more. I also realised if I was really serious about working with the Muslim community, I had to go to Pakistan to understand where people were coming from.

I spent six months there, and the thing that made the biggest impression was the honour based culture, with so many examples of people protecting their family honour or their community honour. In the west we think of growing up in the nuclear family, and when someone becomes an adult, we value their independence. They decide who they marry, what job they have. But in an honour based culture, it’s a collective decision. I knew a girl who was promised a car, but her uncle said no.

We sit outside of the extended family at The Well. I knew someone who went to an agency to get a passport, and before she got home from her appointment, her husband had been phoned to say ‘did you know your wife was applying for a passport?’ There’s no risk of that here.

We do not hide that we’re coming from a Christian faith, but it’s never about pushing what we believe into others’ faces. That was weaved into the ethos of The Well right from the beginning. People should not feel we’re using their need to then be able to push something else on to them. But I do know that people deeply respect that we’re people of faith.

It’s always felt as if The Well is responding to problems, and it’s from the massive to the mundane. Politics have such an impact: in 2001, when the government dispersal scheme began, many Iranians and Afghans arrived when Glasgow became a dispersal city. The next change was asylum seekers – there were always groups at different times. In 2008, after the crash, we had Pakistanis from all over Europe coming and that was really new. After the EU expansion, we had more Romanians, and then it was the Brexit vote, which really forced people to decide whether to come or go.

We’ve met many women in very controlling, abusive marriages; and when they leave the family they are really on the outside, because they’re perceived to have brought shame on the family. But when I meet women who’ve been through that I say you’re the pioneers, because others will see it’s possible. Sometimes it’s the in-laws who are controlling, and that can be domestic abuse too.

I worry the next period will be the most challenging, as we meet people who we can’t help. Covid 19 is creating more barriers. But The Well is such a unique place. And in my time, as the area has changed, so The Well has, but the core of what it does is the same.

Stories from The Well- Part 3